Design and develop a game that explores the theme of ‘playbour’. I would preferably work within Unity, as I have enough knowledge to produce a game by the end of the two week period, but I would like to learn a lot more.

I will decide on the player interface after I have a solid grounding for the game’s design. It may be something as simple as mouse & keyboard, or perhaps as elaborate as a Kinect or a custom interface.

I am unsure whether I should work in 2D or 3D. The answer to this may reveal itself during development.

The game will also have to be simple. I will need to focus on one strong mechanic and build around that.

My main inspiration gameplay-wise, at least for now, is Papers, Please. The game perfectly encapsulates the idea of playbour, whilst remaining relatively simple and having a strong conceptual foundation.

However, I looked into The Stanley Parable, during Design Domain Part I. This game is very strong conceptually, and its commentary on the laborious nature of Video Games is extremely relevant.

I would like to limit my concepts to labour and dehumanisation.

More specifically, labour that involves repetitive tasks such as working at a till in a supermarket or an office desk job.

Dehumanisation involves the reduction of a workforce or other subjects into numbers or statistics.

After reading The Extinction Rebellion Handbook I noticed that several writers attribute climate change to growth-based economics, which is now the dominant form all over the globe. In order to achieve growth, production needs to constantly accelerate alongside consumption. This produces a lot of waste that contributes to climate change.

I wouldn’t want to focus on the climate change aspect but more our relationship towards nature. There were many cultures that had more respectful attitudes towards nature in the past (before they were colonised by westerners) so I believe the attitude can be regained.

I regularly see proposed solutions to climate change that involve new technology to oppose nature, for example, Dutch engineers proposed that we build a dam across the north sea to hinder the flooding of Europe from rising sea levels. I think this is a dangerous mindset.

It would be interesting to develop a game that explores the idea of rapid production at the expense of nature.

It is common practice for militaries to dehumanise the enemy and their own soldiers. A have a few friends that have joined different branches of the armed forces, and all of which had their heads shaved and a number that they were assigned, during their phase one training. This phase involved intense physical work and very little sleep. The guys in charge (I’m not sure what rank) would refer to the soldiers by their numbers and not by their names. This paired with the shaven heads and the uniforms stripped the soldiers of any individuality.

It is common to dehumanise the enemy in military scenarios. This is an area I know very little about but will learn more over the course of this project. It is easier to end the lives of others when one sees them as less than human. This can be achieved by convincing an army that their enemies are evil, uncivilised or savage. It can also be created by creating distance between the killer and the enemy. This can be achieved through drone-strikes through unmanned aircraft.

I have been reading a book about the Troubles in Northern Ireland. The book is advertised as though it is a true-crime piece but it is deeper than that. It is more of a historical account of the events in Northern Ireland, but is framed around the disappearance of a single mother of five children.

In one section of the book, the author describes the desensitisation to the loss of life from both the IRA and British Armed forces.

For example, Gerry Adams received a secret offer from Margaret Thatcher that could have ended the hunger strikes in Long Kesh. The author suspects that Adams rejected the offer as he predicted the deaths of the prisoners would result in a public outcry that would propel his launch into politics. This scenario is a bit iffy morally. On the one hand, one might claim that Adams is solely responsible for the death of the ten prisoners, but on the other hand, one may claim that the deaths were a fundamental move towards establishing the Irish nationalist movement as a legitimate political movement, allowing Sinn Fein to rise and bring peace to NI, saving more lives than the 10.

There had been several terror attacks or assassination attempts by loyalist paramilitaries during the troubles. It was not uncommon for the British Armed forces to have been informed of these plots. However, the armed forces would often turn a blind eye and allow the attack to unfold.

This period of history is rich in ethical dilemmas to be explored.

I would like to explore this concept through a video game that has the player assume the role of military intelligence. The player is sat behind a desk and can approve or deny proposed missions. Perhaps the player has a certain goal to assassinate enemy leaders or suppress a movement and must choose what missions to go ahead with to achieve this. I would also like to mix this work in with mundane work like making cups of coffee or shredding documents. The player will be confronted with the human cost of their actions.

Will the game show the human price of the players’ actions? Or will it remain subtle?

After a group tutorial with Paul, we decided it would be interesting to display the work on the large touchscreen in the studio. This could act as a makeshift desk for the player from which they can interact with the virtual environment.

I decided I would just jump straight in and try and develop and design simultaneously.

First I am going to try and code the dragging and dropping mechanic.

I followed a tutorial on how to drag and drop objects in unity. It basically involves converting world space positions into screen positions.

The result is shown above. It works, but it fells unnatural. The object just jumps to whatever position the mouse is at. I adapted the code to lift it off the surface, then move towards the mouse through force. With a couple of adjustments in the physics options, the result is good.

I then added two trigger areas that allow the player to detain or free the suspect. I will change this, but for now, the score increases if the player gets it correct. I will find a better method of feedback later.

I originally wrote all the code inside the binder. This was a bad idea as there will be 3 binders and the code will begin to repeat itself. I, therefore, created an empty game object and attached a script that will hold most of the functions. The binder now just holds its own collision data.

After this, I made a couple of 3D objects and textures for the scene to get more of a feel of how it may look.

I have decided I am going to set the game in late 1970s Northern Ireland, but won’t explicitly mention this. This is mostly so I can keep the style consistent.

I created a Pinterest board to find a 1970s aesthetic that I can keep to.

I began to make polaroids as evidence for the player to decide whether or not to detain the suspect. I can’t draw too well without reference, so I decided I would rely heavily on photographic reference. I may splice images together in photoshop in order to create a scene in which I can trace. 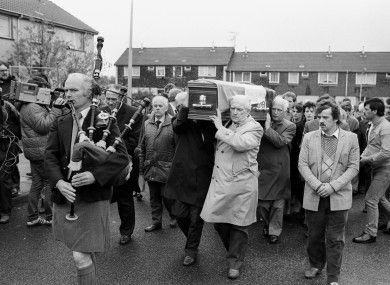 Some of the image above is obviously traced, but I tried to add some extra characters.